Monthly and seasonal fluctuations in median sales prices are quite normal and do not necessarily say much about changes in fair market values. For that one must look at longer-term trends. However, for what it is worth, the median price in February was the highest since it peaked in May of 2015. If this spring is like the past 4 springs in which a very-high-demand/ very-low-supply dynamic prevailed, then sustained home-price appreciation may start showing up in the statistics during the next few months. 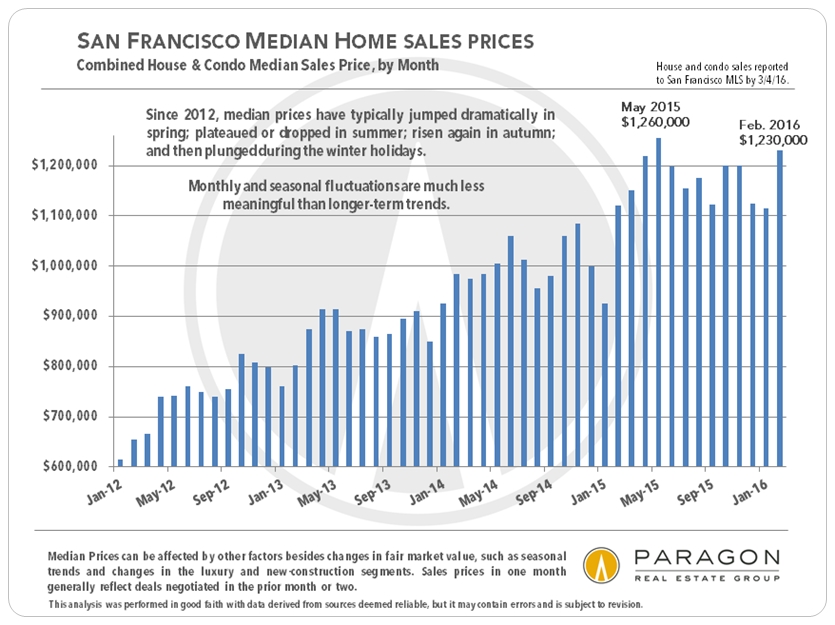 We say this very preliminarily since the 2016 market has just gotten started after the holiday doldrums, but it appears that San Francisco homebuyers are generally shrugging off the recent volatility in the stock market. That doesn’t necessarily mean there will be a repeat of the overheated markets of the past few years. Much more will be known once the spring selling season really gets into full swing. 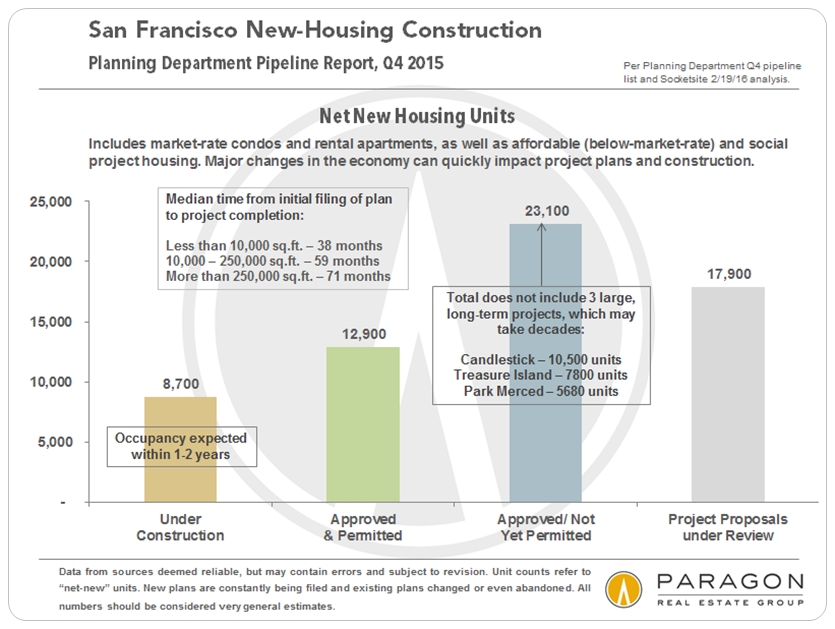 Developers continue to add projects with thousands of new units to the San Francisco new-housing pipeline. If they are built as currently planned (as of Q4 2015), the city should add over 60,000 new housing units (market-rate condos and apartments, and affordable and social-project housing) over the next 5 to 6 years, with another 25,000 in 3 huge projects that may take decades to complete. However, new developments are being constantly added to the pipeline, and existing plans are regularly altered. They may even be abandoned if economic or political conditions dramatically change.

So far, increased supply due to completed new construction has not created significant downward pressure on prices. This may change as construction completion accelerates in coming years, however almost all of the market-rate development is directed toward the more (or most) expensive end of the condo and apartment market. House sales will continue to become a smaller and smaller percentage of the SF market, which may play a role in enhancing their values. 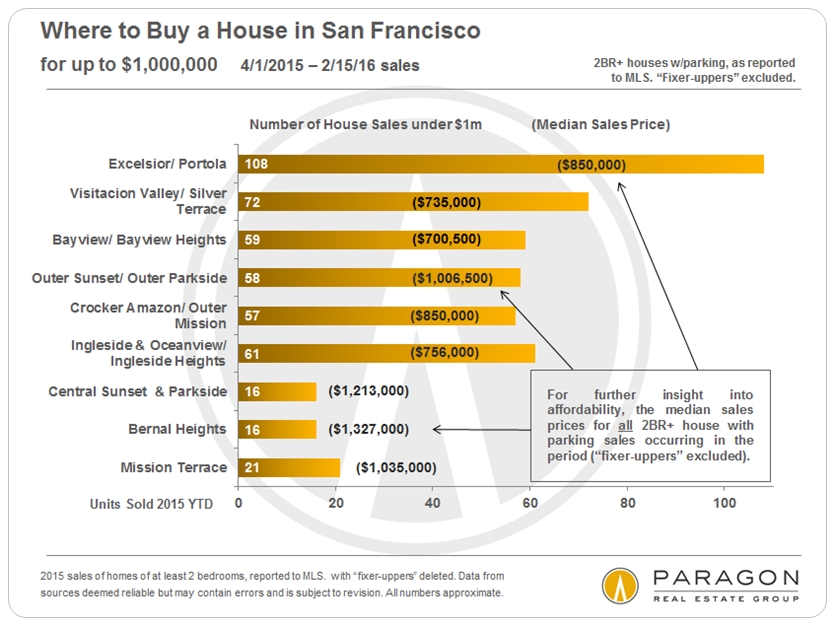 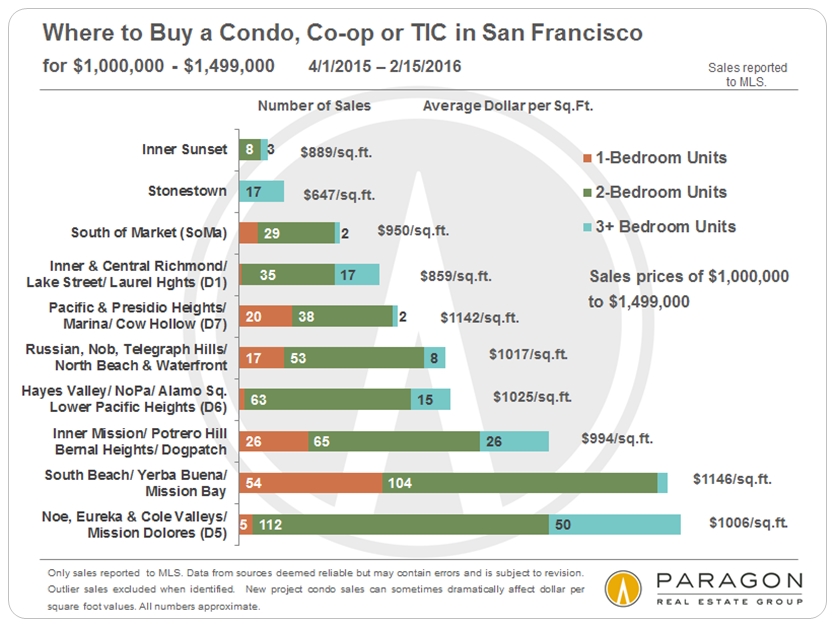 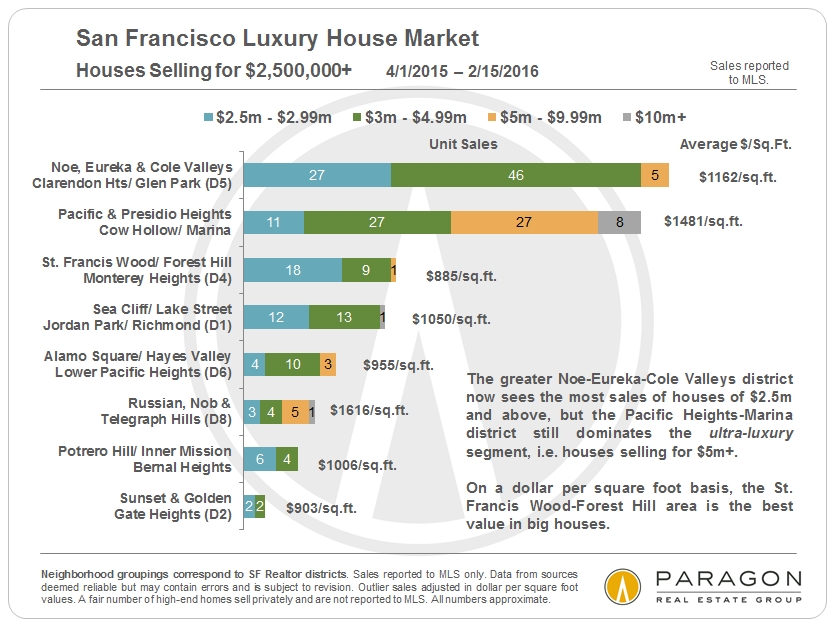 The charts above are 3 of 8 in our updated report: San Francisco Neighborhood Affordability 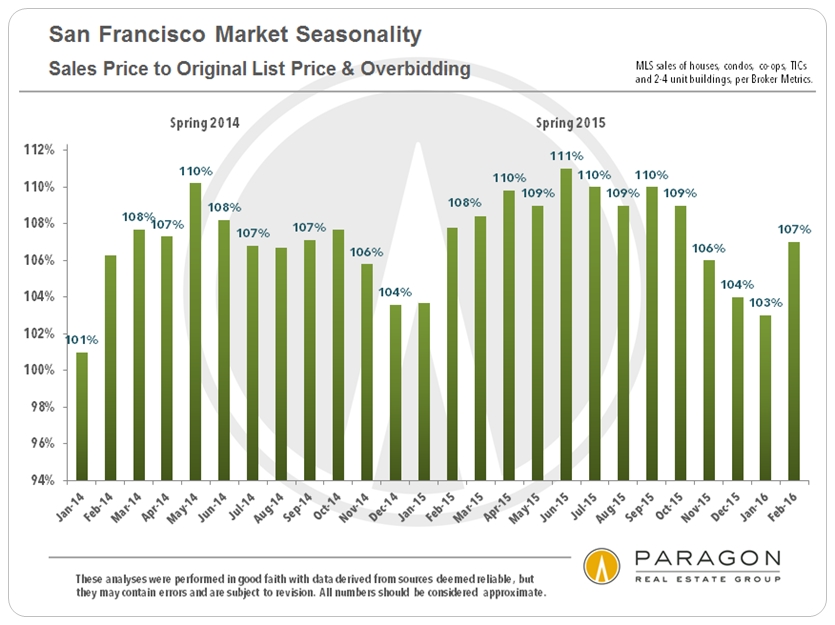 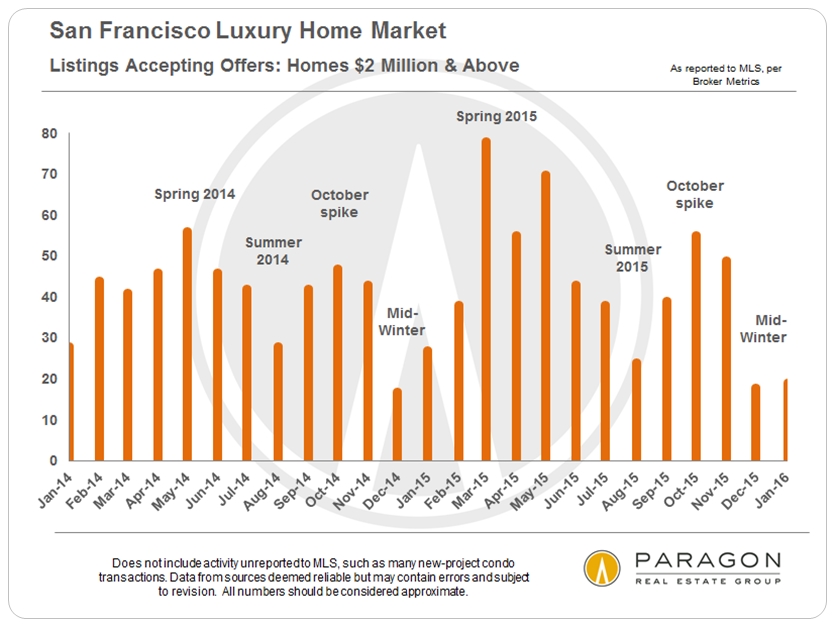 The San Francisco real estate market is deeply affected by seasonality, which shows up in the rise and fall of inventory, buyer demand, overbidding and median prices. For the past 4 years, spring has experienced the most feverish buyer competition for new listings, which led to the highest overbidding percentages, as seen in the first chart above. (111% signifies an average sales price 11% over the asking price.) In February 2016, the percentage over list price started climbing again after the usual slowdown of the winter holidays.

The luxury home segment is even more dramatically affected by seasonality than the general market. As seen in the second chart above tracking accepted offers, expensive home sales typically soar to their high point in spring, drop during the summer holidays, rebound for the relatively short autumn season, and then plunge deeply in mid-winter. This ebb and flow of high-end sales is one of the factors behind short-term, seasonal ups and downs in median sales price. So far in 2016, luxury home closings have been comparable to early 2015, but we are just entering the main selling season now. 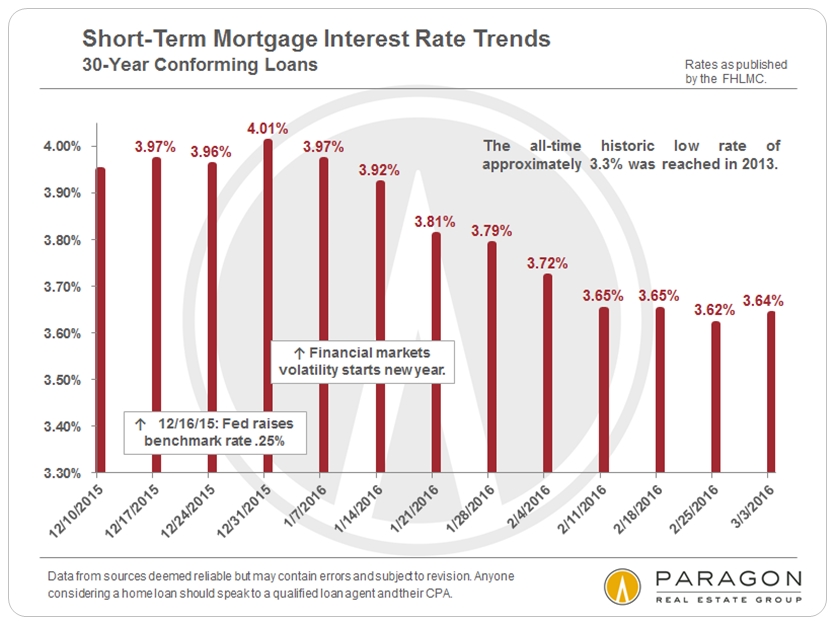 Since the Federal Reserve Bank raised the benchmark interest rate in mid-December, interest rates have actually dropped by about 8% (as of March 3), which makes a significant difference in monthly mortgage costs and loan underwriting qualification. This downward pressure on rates is generally ascribed to the dramatic volatility in the stock market since the year began. (Investors often pour money into bonds in times of stock market volatility, which then lowers the interest rate.) It is famously difficult to predict interest rate movements, which can be sudden and dramatic, but for the time being, they are getting closer to the all-time low in 2013. That is good news for the real estate market, while it lasts. 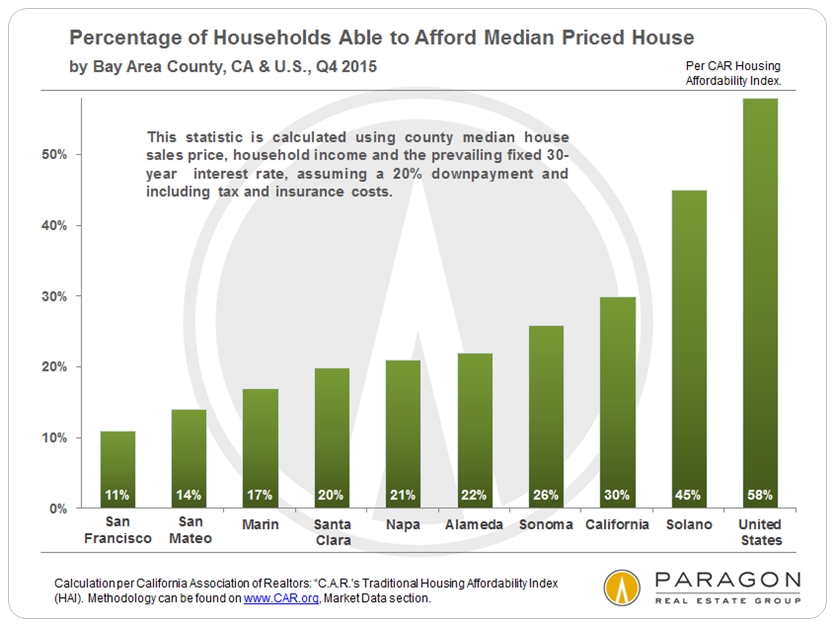 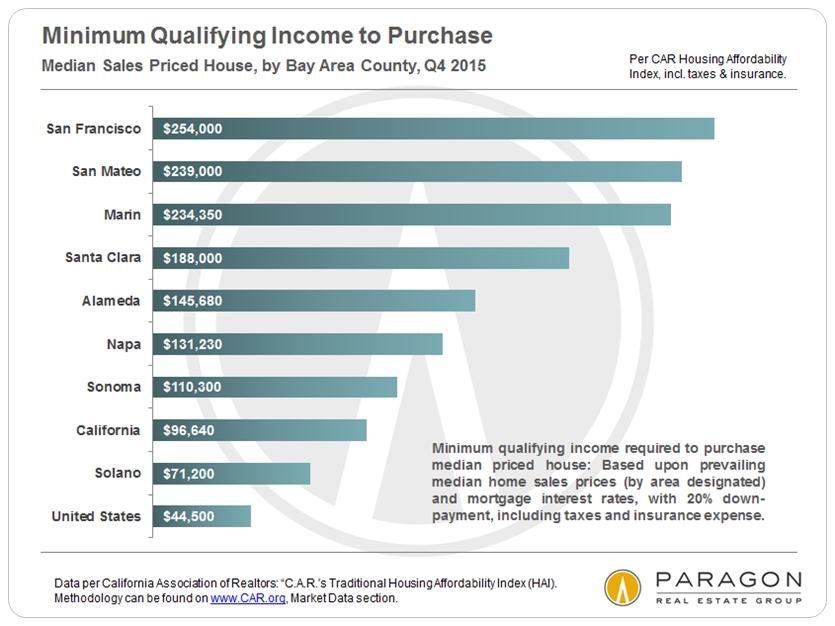 Housing affordability is one of the biggest political issues in the city and the Bay Area. The California Association of Realtors recently released its Housing Affordability Index (HAI) for the 4th quarter of 2015, and above are 3 of 10 charts in our updated analysis. San Francisco is now 3 percentage points above its all-time low of 8%, last reached in Q3 2007, however there has not yet occurred the convergence in extreme low affordability across Bay Area counties seen in 2007. Interest rates play a big role in affordability calculations and, as noted earlier, they have been falling in 2016. 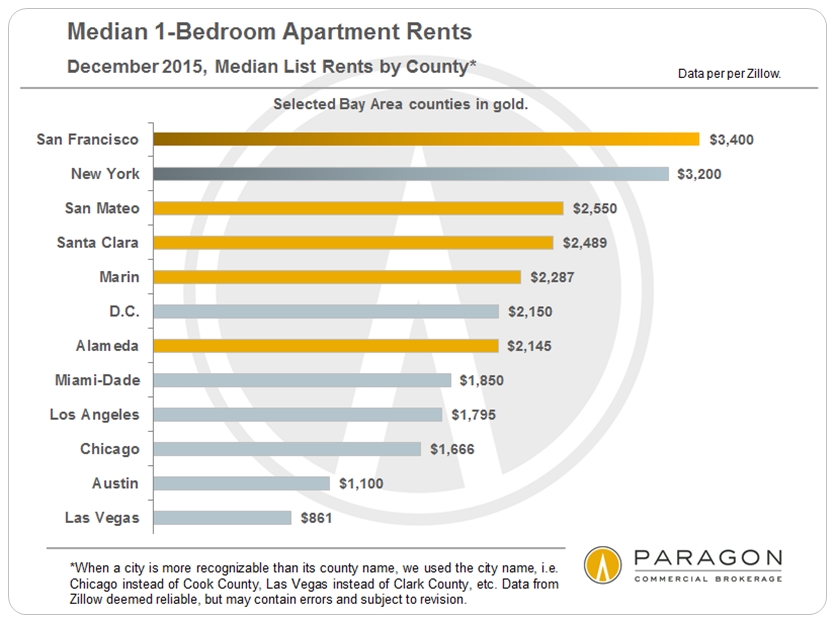 Despite ticking down a tiny bit at the end of 2015, San Francisco rents remain the highest in the nation. Since rents are not ameliorated by low interest rates and the numerous tax advantages pertaining to homeownership, new renters in the city bear the worst brunt of the housing affordability crisis, even more so than new homebuyers. A number of large, new rental apartment buildings have recently been coming on the market and many more are planned. This new inventory may eventually help provide significant rental-rate relief, however almost all the market-rate projects being built feature luxury apartments priced at the very high end: New studio units can rent for $3500 per month and more.