Two of the biggest drivers of local real estate demand in recent years have been increasing employment and new wealth creation, both of which exploded in San Francisco and the Bay Area. Approximately 600,000 new Bay Area jobs and 100,000 SF jobs have been added in the past 6 years. IPOs, unicorns and surging stock valuations created thousands of millionaires, dozens of billionaires and trillions of dollars in new wealth. The S&P 500 roughly doubled in the 5 years to mid-2015. Interest rates plummeted. And there was an exuberant optimism that the boom would only continue to soar. Add those ingredients to a deeply inadequate supply of housing and the result is a real estate market boiling over, with skyrocketing home prices and rents 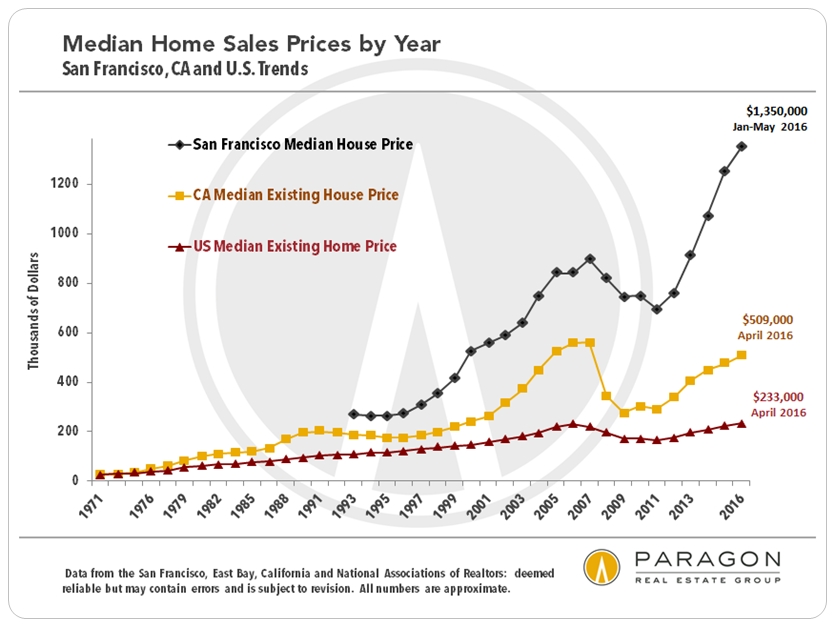 Two of the biggest drivers of local real estate demand in recent years have been increasing employment and new wealth creation, both of which exploded in San Francisco and the Bay Area. Approximately 600,000 new Bay Area jobs and 100,000 SF jobs have been added in the past 6 years. IPOs, unicorns and surging stock valuations created thousands of millionaires, dozens of billionaires and trillions of dollars in new wealth. The S&P 500 roughly doubled in the 5 years to mid-2015. Interest rates plummeted. And there was an exuberant optimism that the boom would only continue to soar. Add those ingredients to a deeply inadequate supply of housing and the result is a real estate market boiling over, with skyrocketing home prices and rents.

But in mid-2015, fears regarding the world economy burgeoned; Bay Area IPOs started to dry up, (over 80 in 2013 to mid-2015; 1 so far in 2016); the valuations of many high-profile IPOs and unicorns declined; and the firehose of venture capital investment slackened. The S&P 500 is now flat year over year and housing affordability has dropped close to historic lows. Hiring slowed and then in early 2016, employment numbers started to decline a little in San Francisco. Some of the wild exuberance leaked out of the general economic optimism, and in the city, demand began to soften a little, while listing inventory started to tick up. 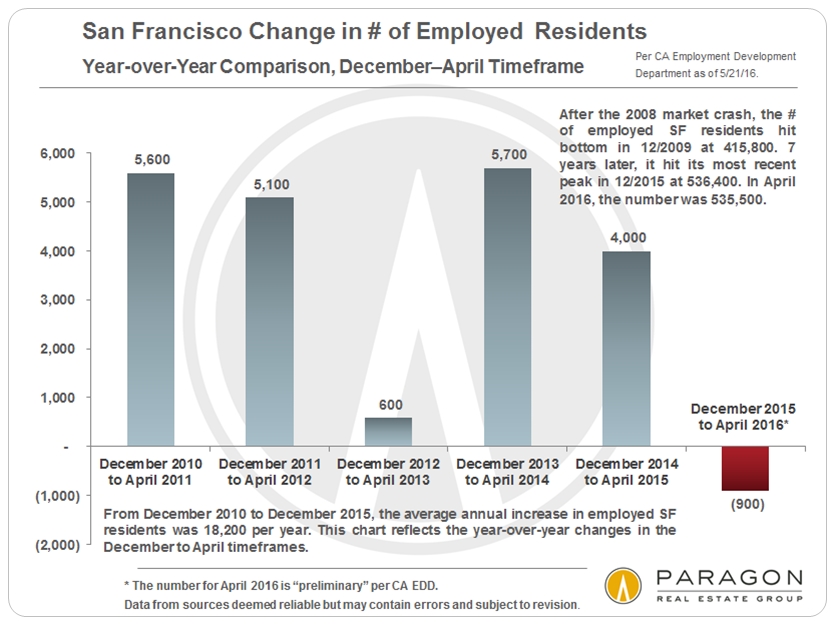 In the first 4 months of 2016, after 6 years of heated growth, the trend in increasing employment numbers in San Francisco reversed itself. This aligns with stories of local start-ups starting to slow hiring and trim staff as venture capitalists have become more demanding. However, this change in hiring could be a short-term phenomenon. 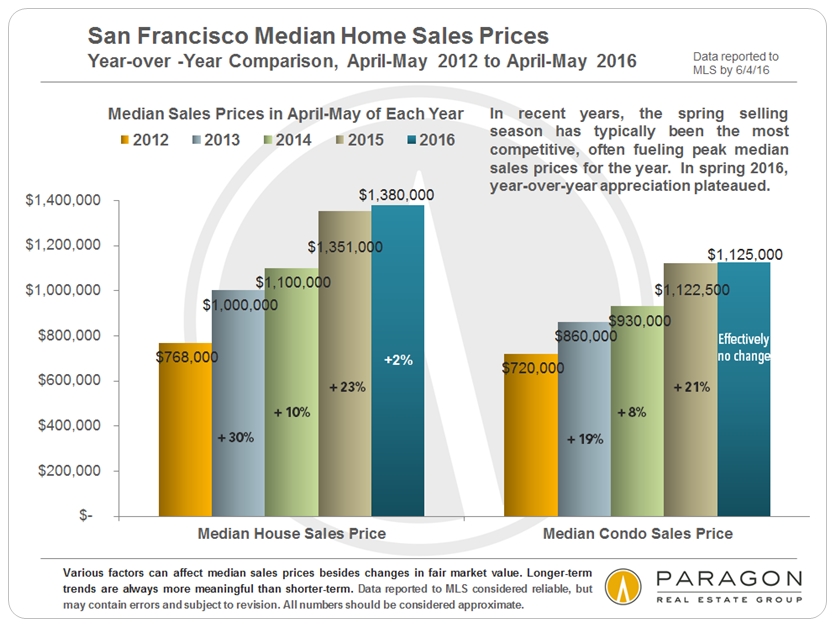 Since 2012, the spring selling season has been the most dynamic period of median home price appreciation. In spring 2016, after years of major increases, year-over-year house and condo price appreciation basically plateaued.

Note: Virtually every time the analysis is changed even slightly, the result will change. The combined house-condo median sales price ($1,280,000) was 5% higher year-over-year, still way down from its 23% jump seen in 2015. Median sales prices can be and often are affected by other factors besides changes in fair market value. 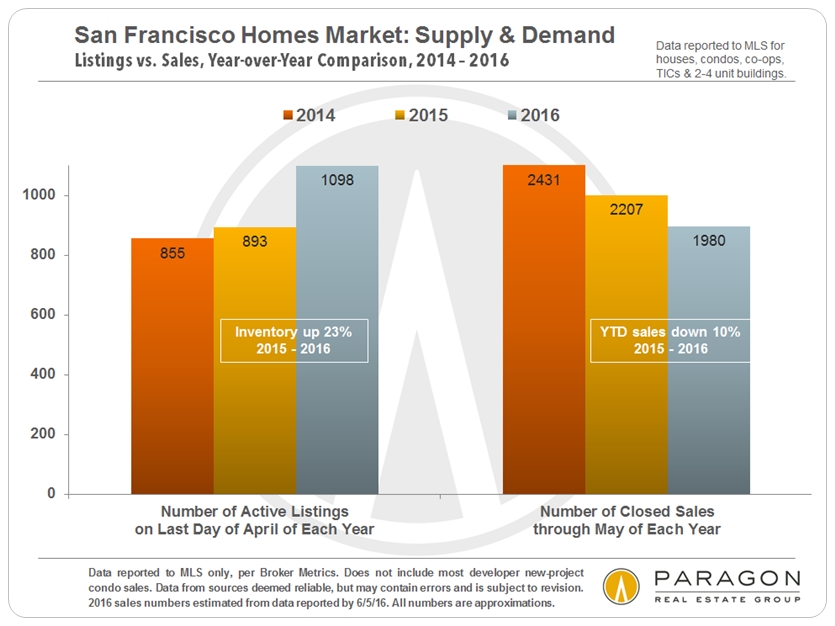 In 2016, the supply and demand dynamic shifted somewhat, with the number of listings available to purchase increasing, but the number of closed sales declining. (There was also a significant increase in listings expiring or being withdrawn from the market without selling, an indication of sellers demanding more than buyers were willing to pay.)

Slowing or plateauing appreciation does not imply a crash, and the cooling of a desperately overheated market to something closer to normal is not bad news. Indeed, an improvement in housing affordability (and supply) would be good news, both socially and economically. Likewise, a shift from irrational exuberance in the local economy to rational optimism would be a healthy change. 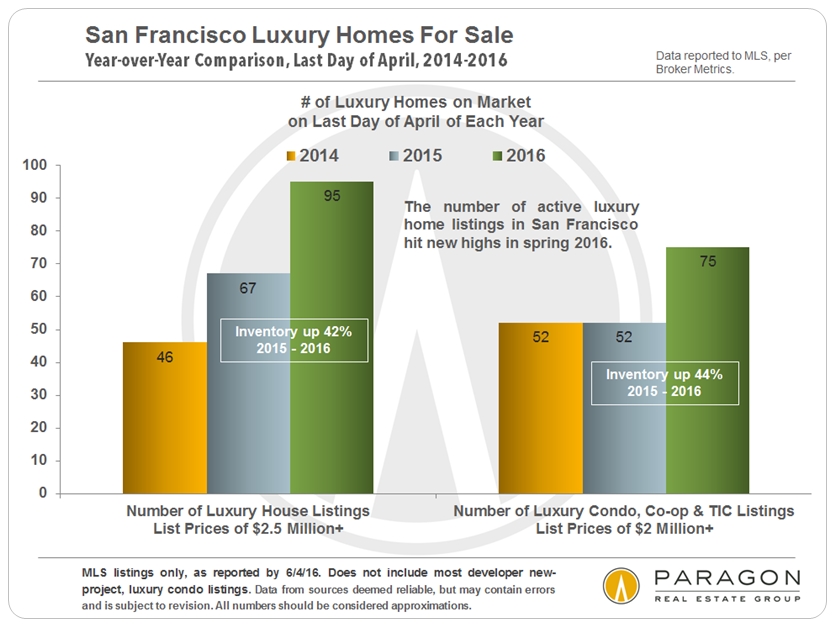 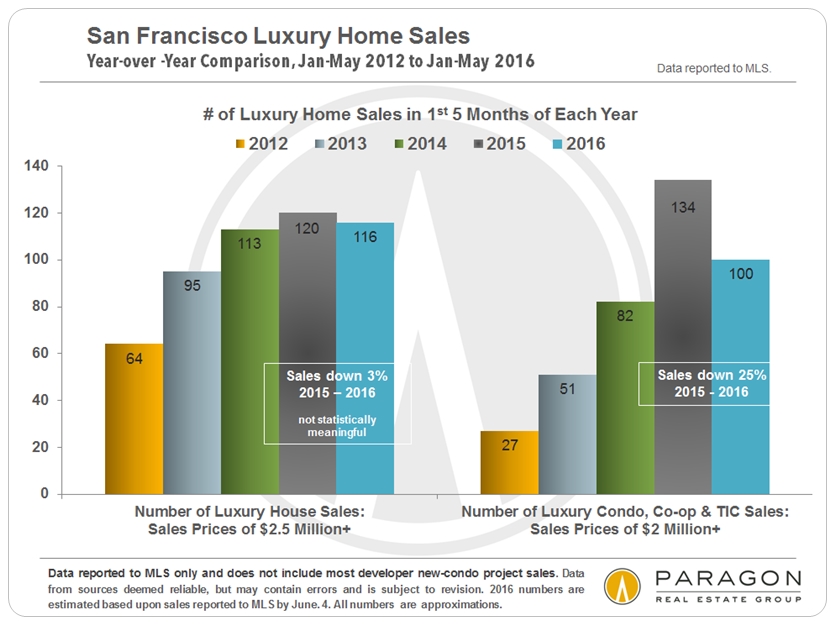 As mentioned in previous reports, it appears the luxury segment has softened to a greater degree than more affordable segments (some of which remain very competitive): The number of high-end listings in MLS has jumped, while sales have plateaued or declined. Why the more dramatic change in the luxury condo market? Firstly, increased competition from new, big, luxury-condo projects may be taking a toll (more supply). Secondly, a significant percentage of these very expensive units are usually purchased as second or third homes, not primary residences: When economic uncertainty swells, this is a market segment often affected first (less demand). Note: We do not have access to up-to-date statistics on new-project, luxury condo sales activity, so do not know if that segment has also cooled or is simply cannibalizing the resale market illustrated above.

Based on preliminary data, it appears that accepted-offer activity in May for luxury houses was very strong, possibly even exceeding levels of Spring 2015, suggesting that buyers took advantage of the greater selection of listings to jump in. If so, this will show up in the sales data for June. 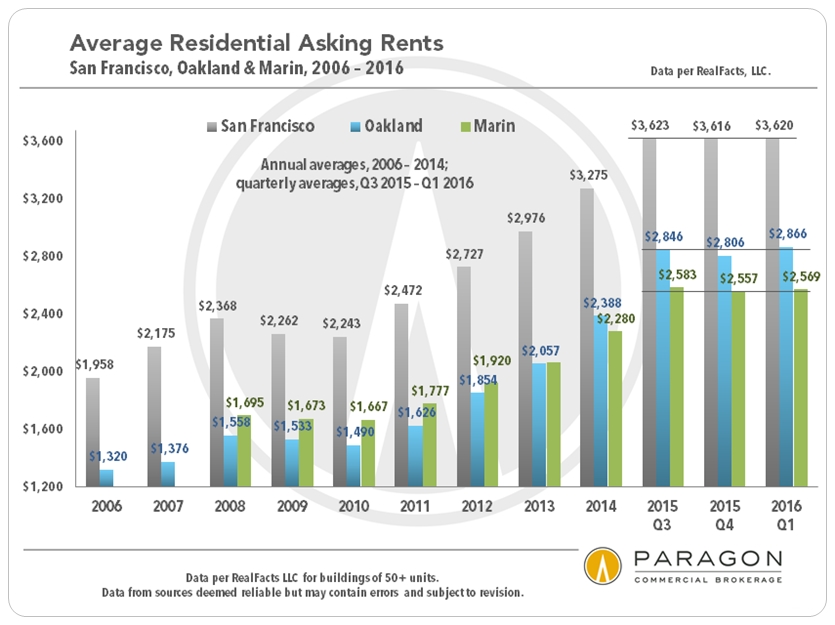 The rental market is especially sensitive to changes in hiring, and, as illustrated above, asking-rent appreciation has plateaued. It is quite possible that actual lease rents have already started to decline, though no decline has yet shown up in the above statistics. (There is no MLS for reporting actual rents paid, so we have to rely on advertised asking-rent data, which is a lagging indicator.) Clearly, available apartment inventory has grown, and renter demand has softened. Large new apartment buildings have been entering the SF market, with more in the pipeline. This quote is from a June 1 Bloomberg article: Softening apartment rents in New York and San Francisco have forced landlord Equity Residential to lower its revenue forecast for the second time this year, as newly signed leases are not meeting company expectations.

This recent data measures relatively short-term changes and may reflect only a temporary economic lull or market fluctuation (which is not uncommon). Also, different neighborhoods, property types and price segments in San Francisco are experiencing varying market conditions, from still-quite-hot (non-luxury houses) to cooler (luxury condos).

A staggering amount of wealth yet remains in the Bay Area. Hundreds of local companies worth hundreds of billions of dollars, including the likes of Uber, Airbnb, Palantir and Pinterest, remain in the near-future, possible-IPO pipeline, and economic optimism can shift quickly. Our business environment continues to be the envy of the world, and unemployment rates persist at near-historic lows. San Francisco ranks with the greatest cities of the world in quality of life, even if stressed by growth and housing-affordability issues. Overall city and Bay Area housing supply remains acutely inadequate to recent population increases.

Compared to almost any other in the country, our real estate market remains quite strong as measured by a wide variety of standard supply and demand statistics, and a substantial percentage of San Francisco home listings still sells quickly for well over asking price.

Buy a home that is affordable now and in the foreseeable future, keeping an appropriate reserve for the unexpected. Buying for the longer term is usually safer than for the shorter term. Lock in a low, fixed, interest rate for an extended period. Expand the list of neighborhoods you are willing to consider and do not just run after brand new listings, but look at those the market has passed by: There will often good buying opportunities with greater room to negotiate. Do not be afraid to make offers below asking price and to negotiate, but carefully review the most recent comparable sales and market indicators. During the summer and mid-winter holiday seasons, the competition for listings significantly declines, and can be excellent times to buy. Be patient: New homes come on the market every day.

Historically, homeownership in the Bay Area has been a good investment, because of long-term appreciation trends, the advantages of leverage, what is called the forced-savings effect (each mortgage payment including principal pay-down), and the many tax advantages. Talk to your accountant or financial planner regarding how these factors might impact you specifically. Admittedly, if one has to sell at the bottom of a down cycle, it can be painful.

There are still plenty of motivated, qualified homebuyers in San Francisco, but do not take for granted that mobs of desperate buyers will show up waving over-asking offers. Price your home correctly right from the moment of going on market as overpricing can have significant negative ramifications. Prepare your home to show in its best possible light: You only have one chance to make the right impression on buyers. Hire an agent who will implement a full-court marketing plan to reach every possible prospective buyer and seize their attention. Stay up to date on comparable listings and sales, market conditions and trends, and adjust appropriately. If you receive an unacceptable offer, do not be insulted: It almost always makes more sense to issue a counter offer instead of outright rejection. 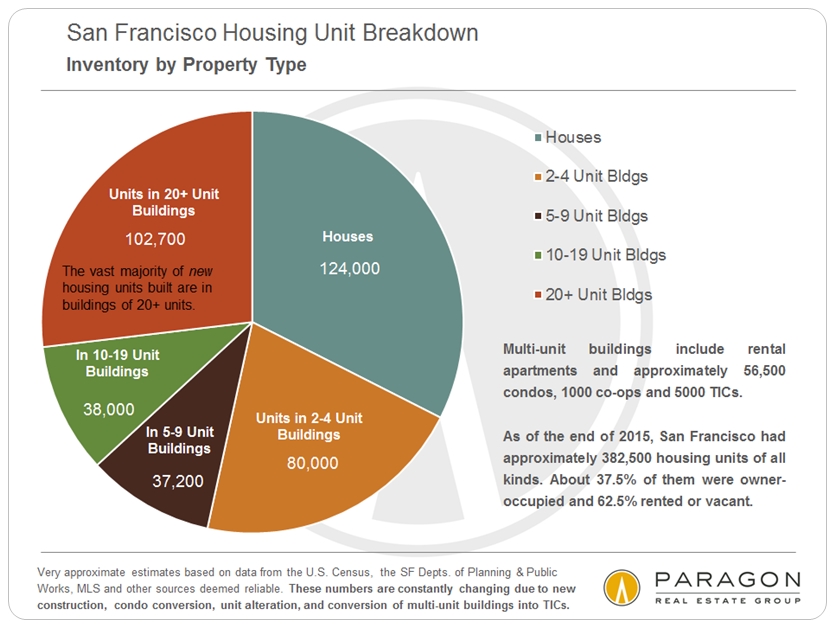 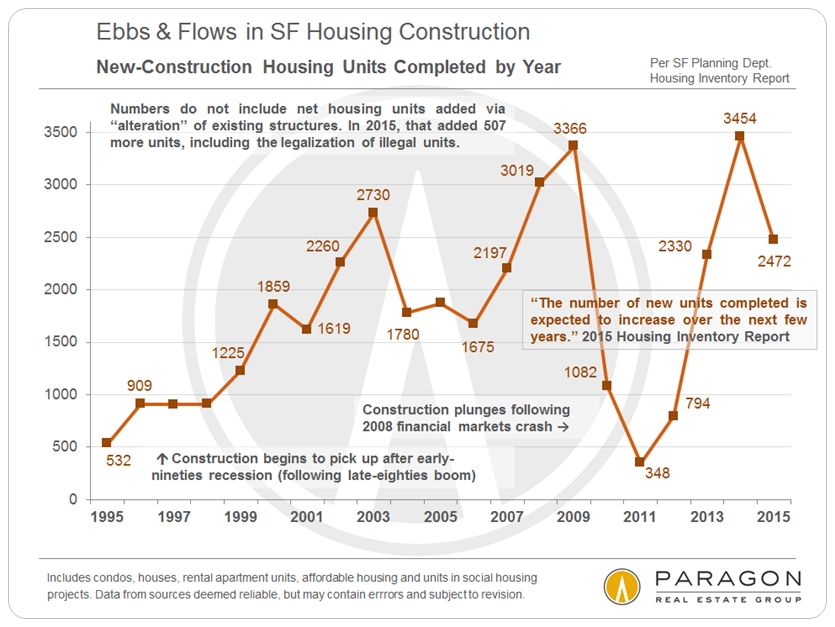 Above are 2 charts from our updated report which contains a great deal of additional information: SF Housing Inventory & Construction Report

These analyses were made in good faith with data from sources deemed reliable, but they may contain errors and are subject to revision. It is not our intent to convince you of a particular position, but to attempt to provide straightforward data and analysis, so you can make your own informed decisions. Statistics are generalities, longer term trends are much more meaningful than short-term, and we will always know more about what’s actually going on in the present, in the future. New construction condos not listed or sold on MLS are not counted in these statistics, though they often affect market dynamics.